Bracket: https://125fps.challonge.com/sundaycup109 (will be available in 1-2h before cup start)

125 FPS VODs, and some other links

Creation and Timeline of 125 FPS

March / April 2012
On March 29th the league is created with the following format: Daily cups to qualify for the monthly finals with small prize money. On April 2nd, the Daily Cup #1 is won by Russian player strongest (he won the 5 first daily cups). The admins were Yavich, Nico, rell and xron.

Yavich: So, it all started at the beginning of 2012. Back then, the 125fps.com website already existed as a CIS portal about FPS games, and I wanted to organize tournaments on its behalf. At this time, I already had an idea for what kind of tournament it should be: daily cups, fully automatic, with minimal participation from the admins (since nobody want to spend several hours running cups every day). Ideally, at the end of the tournament, the winner would be rewarded with some money or some 125fps.com points/internal currency. Alas, I did not know any programmers, nor have the required money for the implementation of all this on my website, I had to look for third-party options. The closest thing with the proper features was Challonge.com, so it was decided to hold tournaments there.

The hardest part remained: to find a sponsor)) One of my friends (I do not even remember who) already told me about Nico, who then provided financial assistance to some local prospective player. After talking with Nico, he agreed to help with the prize, but did not express much enthusiasm. But in the course of the matter, he got so involved that he began to deal more and more with the organization itself.

A few words about the choice of the format of daily tournaments: the Quakelive scene was still quite alive, major tournaments were held, and on Sundays there were Zotac cups. The top players had good cups for them, while the other quakers had a hard time. They could only compete in the first rounds of the Zotac cups. I wanted to support the local second tier scene, and the tournament would be considered only as an alternative to simple practice on public servers. Therefore, the prize was initially planned to be very small, so it wouldn’t attract the top players. But, unexpectedly for us, after a few tournaments, a few top players like evil, agent and others began to play our tournaments regularly. Although it was slightly out of the picture, we had of course, nothing against this))

A few more words about the odd and random format of the Daily Cups:


Yavich: During the first daily cups, I had constant discussion with the participants about the format of the tournament. It was, of course, very strange and unusual. Firstly, all games were bo1. Secondly, the seeds were completely random. And thirdly, the map was chosen by the high seed. Many didn't understand why we did this. The answer was obvious: in addition to reduce the duration of the cup, one of the most important task for me was to increase the randomness, however strange it sounded. Quake has always been a game that depends only on the skill, and with this exceptionally good quality, in my opinion, there is one reason for its declining popularity. Remember the Zotac cups? It was enough to look at the list of the participants to be sure of who will win. (The same problem now happens in Sunday Cups, which are always won by evil or agent; excepted one cup in October last year, it's easy to guess agent and evil didn't participate.) Therefore, for a greater variety, even for the lower-skilled scene, such tricks were introduced. Most of them had to be abandoned, when the daily cups began to be stuffed with top players.

After the new format came another news about improved cash prize: a new sponsor, Alexey A from Moscow region, offered to donate 31,500 RUB every month.

The March 2013 league, with the improved cash prize, attracted a lot of European top players. The 125 FPS leagues became popular all across Europe.

Yavich: After a while, the number of participants began to decrease. Many times we didn’t even have 8 players, which was considered the minimum for the tournament. It was time to change something. At the same time, Zotac and other similar tournaments had already ceased activity, so we decided to hold tournaments more vividly. I've always liked the unusual multi-stage league format, and I did not want a simple system like 8 groups of 4 players followed by playoffs. Therefore, we created a system with qualifications and 2 group stages. The first stage was inspired by the daily cups: without top players (we put them into the 2nd group stage), and with bo1 matches.

Just at this time, Alexey A reached out to us, he increased the cash prize by almost 10 times, which allowed us to invite all the top players of the continent.


May 2013
A new event appeared: Showmatch. The first show-match planned was agent against strenx in a bo7 match. However, agent wasn’t able to play and was replaced by evil. Players were rewarded 15 USD for a map win.

Winter 2014
More and more thematic cups with cash prize were organized (Q3 Gods, Polsta Cups, Cool / Oldschool / Fast Maps cups). Until November 2014, at the exception of the July PreQCon 2014 league, the format remained the same. Then the leagues changed from one month to two months for a more relaxed schedule. For this new format, Alexey A donated 50,000 RUB every two months.

Shortly after the new format was released, the Amateur (div2) league was announced for the players who failed in the qualifications or during the first group stage. The Amateur was also open for all players under 2200 ELO and 300 duels played. The Amateur league had 3 seasons before it was stopped because of no-shows.

20 March 2015
A new cup with prize money appeared: the Sunday Cup! This first edition is won by baSe. The cups are funded by donations while the pro leagues were still funded by Alexey A’s donations.

Fall 2015
Starting with season 26, the donors have a chance to win a lottery and decide the 7th map in the map pool. The 10th show-match, fazz against k1llsen, and the second One Map Cups on Hektik are the last thematic cups organized. The Sunday Cups quickly became the standard one-day cup in 2015.

Clash of the titans: a show-match example.

Season #28 Jan-Feb 2016
Once again, the league evolved with a new format to keep the players motivated. Starting with the 21st Sunday Cup, the season are still played over 2 months, but only consists of Sunday Cups (rewarded with cash prize and points). The 8 players with most points after 7-8 cups are qualified for the Season Finals (played on the last Sunday of the season). The inspiration directly comes from the FACEIT cups.

All this great work couldn't exist without the work of the 125 FPS staff team: 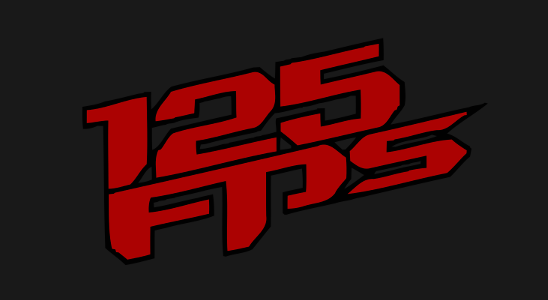 There are a lot of statistics on the 125fps.com website. There you can find a list of the players, the tournaments and even the maps for each season.

The champions
After 34 seasons finals, the most noticeable players in 125 FPS are as following:

The maps
From the map statistics, the leagues has favored 7 maps by far. Here are the number of appearance for each map in the league's 34 seasons:
The Donations
Starting in 2015, Nico has been releasing the details of all the donations. Of course, the league couldn't get all its cash-prize without the donors. So here is a mere compilation of the top20 donors to put in the light a part of those who contributed since 2015. The list is not exhaustive of course, and note that 23,974 RUB came from anonymous people.
In 2017, 125 FPS has collected 23,177 RUB in donations until the end of March. Compared to the totals of 2016 (392,586 RUB) and 2015 (557,104 RUB), the sum could use a boost. If you feel generous, don't hesitate to visit the Money page to find out how to donate.

Huge thanks to all our donators, we do it real - we are keep going our QL cups!
We are starting off a new Quake Live Duel Season number #35. The same format - Sunday cups every weekend with points (as well as prizes, see "Rules and Prizes") for the top-8 culminating in a season finale on the last weekend between the 8 players who accumulated the most points through the course of the season. The season finale will take played out with a group stage (2 groups with 4 players) with two players from each group progressing to a single elim bracket. Season#35 prizepool will be announced a bit later.

102team, Stream Hub
Donate: Donate link, Big thanks to all our donators for their money, your support is very important for players, for 125 FPS project and for all Quake community, thanks a lot!. Detailed information about the 125fps cash flow in 2015 can be found here.
Links:125fps Discord, irc #125fps,

Huge thanks to all our donators, we do it real - we are keep going our QL cups!
We are starting off a new Quake Live Duel Season number #34. The same format - Sunday cups every weekend with points (as well as prizes, see "Rules and Prizes") for the top-8 culminating in a season finale on the last weekend between the 8 players who accumulated the most points through the course of the season. The season finale will take played out with a group stage (2 groups with 4 players) with two players from each group progressing to a single elim bracket. Season#32 prizepool will be announced a bit later.

- Season is finished, congratulations to our champion

flairTV ; Stream Hub
Donate: Donate link, Big thanks to all our donators for their money, your support is very important for players, for 125 FPS project and for all Quake community, thanks a lot!. Detailed information about the 125fps cash flow in 2015 can be found here.
Links:irc #125fps,